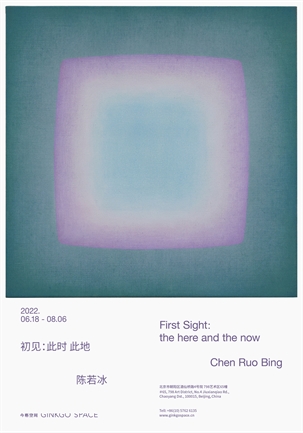 Ginkgo space is pleased to announce Chen Ruo Bing’s fourth solo exhibition at Ginkgo Space “First Sight：the here and the Now”. Scheduled from June 18 to August 6, 2022, the exhibition will present Chen's latest paintings in the past two years.

When Chen Ruo Bing was studying in the Department of Traditional Chinese Painting at the China Academy of Art in the 1990s, he created “ink space” on paper by thinking about the emptiness, silence, and simplicity in the landscape space from the perspective of Chinese ink painting. His study at the Kunstakademie Düsseldorf ushered in his consciousness and exploration of the world of color, two simple powers of “brushstroke” and “color” began to release quietly from the image. Focusing on the in-depth exploration of visual experience, through layers of hidden “narration”, Chen Ruo Bing’s works sublimate the perception and experience of seeing and reading, inspiring echoes from the spiritual world.

The works of this exhibition was created in the two years when Covid-19 was raging the whole world, during which the profound impression and potential influence of the environment and nature on the artist penetrated the works inevitably. The works continue the artist’s artistic practice, some of the new works highlighting the feature of horizontal dimension, thus the concept of space is further promoted from “far-reaching” to “wide and far”. The “shape” and “body” in the image are simplified to the extreme, meanwhile the flow, transition, rendering, and penetration of colors are strengthened. This kind of penetration occupies the entire image, and even spreads outside the painting. The geometric strip near the edge of the image resembles a paperweight, and evokes the shore of consciousness in the diffuse fog, lending a base of support for the spreading colors, soothing the mind, and providing a point of convergence for the gaze. The energy conveyed by the artist through color and space encounters with the “first-sight audience”—what kind of feeling will be inspired from the heart of the audience “the here and the now”?