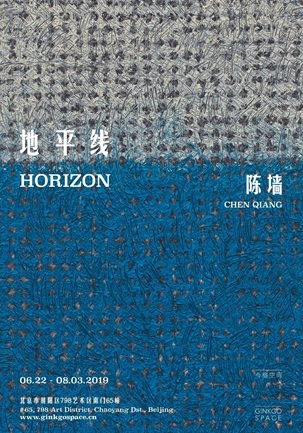 Gingko Space is to announce artist Chen Qiang’s solo exhibition, "Horizon" on June 22, 2019. For this first solo exhibition in Beijing, the artist will present two series of paintings completed from 2018 to 2019, and the exhibition will continue to August 3th, 2019.

Since the 1990s, Chen Qiang has been engaged in exploring abstract painting. His artistic career can be generally divided into four periods: his line drawings on paper and canvas in the 1990s, during which the artist searched for notions of pure "looking" to emphasize on "perception" through "looking" without reading. In the following period, from 2007 to 2013, his painting focused on "perception". By abandoning decorative forms, brushwork, and palette, Chen afforded freedom to the paint, so his imageries would become more genuine and further emancipates "cognition" from "perception" in traditional painting. Works from this period are marked by the natural accumulation of paint to stimulate visual experiences, from which, the artist aimed to achieve heightened alertness in visual “perception”. Since 2013, Chen Qiang further explores new meanings of "perception". For example, since one's "perceptive" angle in looking at art is either East or West, the artist tries to challenge and generate a free system of perception from the indoctrinated models of the East and West.

Gingko Space’s first collaboration with artist Chen Qiang in his solo exhibition, “Horizon” aims to explore the extractions and sublimation on the new meanings of "perception". Chen paints a horizontal across the middle of each painting that divides the image in two, with the aim to undermine its entirety. Our visual conventions would quickly conceive this line as a horizon, so such division would disappear immediately, and the imagery would then come together as sky and earth from this horizon. The artist aims to challenge and generate a free system of perception.