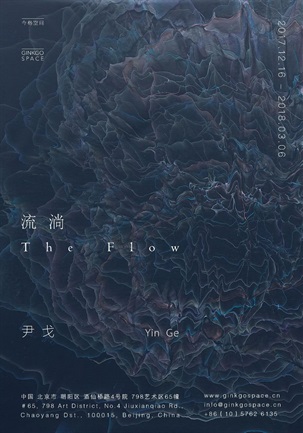 Ginkgo Space will present artist Yin Ge’s first solo exhibition at this venue, The Flow. The opening reception is on December 16th, 2017. The exhibition features the artist’s recent works created between 2013 and 2017.

Yin Ge’s work demonstrates an integrative method. Since 2003, he has turned away from common painting tools such as brushes or palate knives, and developed a method of pouring mixed and toned acrylic paint onto horizontally positioned canvases, allowing for a natural flow of paint which is subtly controlled by the artist.

Yin Ge’s oeuvre is not mere abstraction, or simply the outcome of sheer randomness. Nor is it strictly guided by theories or the artist’s emotional expression. Instead, the restrained way he works directly shapes the structures of “randomness” in his artworks. After more than ten years of experimenting, he has developed a spectacular form of rational control in his own work. The breakthroughs he's made have proven this unique method to have its own sphere of potential.