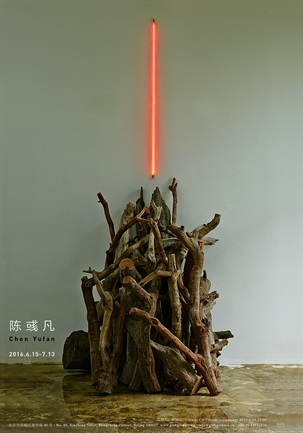 Ginkgo Space is honored to have invited the artist Chen Yufan for his eponymous solo show and to invite Cui Cancan to shoulder the work as curator. The exhibition will open on June 15th, 2016 and remain until the 13rd of July. This exhibition brings together twelve of Chen Yufan's paintings and installation works, a selection of some of the best works from the artist’s portfolio from the past six years. By following the trajectory of Chen Yufan's personal geography, and the knowledge of identity and the transition of forms as the axle, the rotational, drifting, investigative means of narration initiates a fully new linkage and dialogue in an attempt to outline the conceptual fusion and the versatility of expression in Chen Yufan's recent years of artistic creation.

Due perhaps to the quantity of works or from the process of discussion and deliberations preceding the exhibition, this particular solo show will become the most important of the artist’s solo shows in recent years. What it reveals is not only the fruits of labor from a particular time period, but also, by means of a renewed accumulation of the works, the versatility, richness, complexity, as well as the mixed-blood of the artist's creation, and swipe at the solidified understanding with a multi-faceted style.

Chen Yufan's creation is a sedimentation placed between time and reality, using diverse and meticulous emotions and real understanding of daily life as a starting off point, then begin with the movement of seemingly simple regimented repetitions. It is a slow process of emotion eliminating concept, an action resisting abstraction. Within this, the artist’s experiences and meditations on the nature of the individual, existence, repetitive labor, and social order are also incorporated.

Chen Yufan's creations are also at times architectural constructs within a certain space, architectural constructs in the sense as understood by the Song Dynasty Treatise on Architectural Methods.  The layering of dripping colors, the scale-like linkages between blocks of wood, the intertwined layering of lines and the concentrated arrangement of small holes, these carry in them an emphasized visual formalism of woven together and constructed imagery, and in their meticulousness do not lack evidence of rigorously deliberate contemplation. The artist has for many years now maintained the comprehensive employment of multiple materials. In his works, the material is the re-condensed characteristics of 'matter', and the work itself is the repeated spotlighting of the form of 'matter'.

In the 2010 work Into One, the use of the technique of burning holes in pieces of paper, addresses the silent aesthetics of labor and the commonplace. Then in his 2012 work 1.2.1.1.3... the combination of machines and paintings on canvas, acted as a metaphor on the relationship of conflict between the past and the present reality. Carrying on to the 2015 Throw it into Air, which in its multiplied construction of a cyclical mechanism, possessed an inherent logic which is repeated from beginning to end. Chen Yufan unceasingly seems to place himself within a transitory state which casts aside any past certainties and the spiritual constricts of an ideology of inherent nature. This sort of continued evolution of a 'self-critical distance’ constantly derives new contents and essences.

Unlike the artist’s previously periodical creative display, Chen Yufan in this exhibition at Ginkgo Space will fully evaluate the veins of his own creative state from a more macroscopic point of view. The exhibition has specially layed out and revealed a cyclical journey, linking together the upper and ground floor of Ginkgo Space to form something which maintains spatial distance and reflection, a singular object formed of individuals, which in respect corresponds to the different quintessences and idealized worlds of Chen Yufan's own creative process.

In addition to the paintings and installations completed in the studio, the artist has also directed his creations towards the real exhibition space. These works, made according to the specifications of the site, combine painting, photography, light, ready-mades, installation etc. and act as a reflection on past processes and experiences, which reinvigorate the artist's powers of imagination. The construction takes place in a language of ambiguity, cruising amongst disparate cultures and mediums, in particular amongst geographical cultures, alternative spaces and abstract states. In the expression of instability and openness, the remolded meaning of the self, form a new state of time and space.

Cui Cancan is a renowned independent curator in China. He is the recipient of the CCAA (Chinese Contemporary Art Critic Award), YiShu Award for Critical Writing on Contemporary Chinese Art 2013, L'Officiel Art End of Year Award, and was a special observer to the 13th Kassel Documenta. The most important exhibitions he has curated include Between the 5th and the 6th Ring Road in Beijing (OW Space, Beijing, 2015), Ai Weiwei (Galeria Continua and Tang Contemporary Gallery, Beijing, 2015), Unlived by What is Seen (Galeria Continua, Pace Gallery and Tang Contemporary Gallery, Beijing, 2014), FUCKOFF 2 (Groningen Museum, Groningen, 2013), and Heiqiao Night Away (Heiqiao Village, Beijing, 2013).