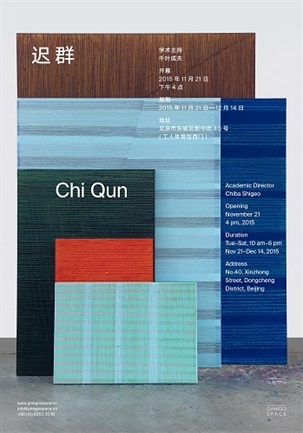 Ginkgo Space is proud to announce the opening of the young artist Chi Qun’s upcoming solo show “Chi Qun” which opens on Nov 21, 2015 at 4 PM. The important Japanese art critic and academic Chiba Shigeo will provided the overall academic direction for the show. Based on her motivation, concept as well as method of “line” as form, the upcoming exhibition will display over ten works on canvas and one work on paper which show a further investigation of Chi Qun in a larger space and surface, and will be on-show until Dec 14, 2015.

Chi Qun’s works are developed aroundlines, but the so-called ‘lines’are not illustrated by brushes dipped with paints, but rather are born with thescraping act on canvas. It is not a result of ‘addingon’ but ‘thinning out’. The ‘thinning out’ method not only allows lines to emerge, but also reveals variations oflayers and gestates an open space. Nevertheless, because these lines aregenerated through the canvas being scraped and thinned out, little by little,and gradually fill the whole image (or we should say, even though the linesfill the entire image), the space gestated within those lines cannot breakaway. This results in a visual moment where the lines metamorphose intovibrating strings, bringing a sense of something strongly woven to her work.

Though Chi Qun’s works appear sedate and dignified, the elements (mind, senses, spirit andthoughts) are expressed in a controlled way, and aggregate as a whole on thecanvas. Chi Qun’s ‘abstract’ in this way – she does not illustrate anything specific, and does not stop at easyformative compositions. Instead, she seeks the unity of mind, senses, spiritand thoughts, turning the ineffable into visible elements via lines, colours,spaces, light and shadow. Though these elements are neutral, they are employedby the artist to create a ‘status’close to the essence of the artist.

Ginkgo Space strives to place contemporary Chinese artists and their artistic practice in the field of study of important international curators and academics, and has specially invited Chiba Shigeo to take over the academic direction for this exhibition.

Chiba Shigeo is one of the leading experts on contemporary Asian art and is a professor at Japan’s Chubu University in Nagoya. He was the curator of the National Museum of Modern Art (Tokyo) from 1975 to 2001 as well as the Japanese advisor for “Kassel Documenta” (1985), the research coordinator of “Japon des Avants Gardes” (Pompidou Center, Paris, 1986–1987), the Japanese commissioner of “Conceptualist Art” (Queens Museum, New York, 1999), and the curator of “Contemporary Art of China and Japan” (Busan City Museum of Art, Busan, 2010). His writings include Japanese Art Yet to be Born, The Actual Situation of Art and Art as Deviation amongst many other important works. Chiba Shigeo began his research on Korean contemporary art in 1970s, and came to China for observing the 85’ Avant-garde Art Movement in 1987. From then on, he kept observing Chinese contemporary art. He has written and researched in-depth analysis of the creation of Chinese contemporary art since 1992 when Chinese contemporary art began to make its first strides onto the global stage.