VOID: there’s nothing more left, but a little trace from human beings 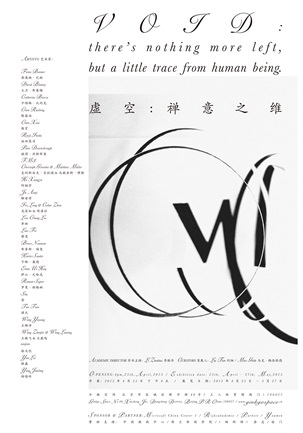 What is Void? This is a question that cannot be answered in terms of 'is'.

It is something that does not exist, a limit marking the extent of the human imagination's desire to reach and attain, a snare in which the intellect fails, an impossible finality. At the same time, it is construed to be a starting point for creation, a fascinating potential realm from which the 'Form' is born.

Therefore, the void is not 'a sort' of form or taste. In the distant today, far from its origins, the significance lies in a functional historical hypothesis, in the changing momentary interface created out of the vibrant duality of ruin and creation. In a continuous process of clearing away to open up a Field, it becomes a transitory, albeit necessary intermediary.

The void allows us to reflect upon fixed concepts of the world and ourselves by allowing for openness and new possibilities for a world that always seems to be running in the same clichématic routine. It is no surprise that this concept has been an enduring feature in contemporary art, where discourses on absence and non-appearance are rightly considered as something worth talking about. Artists today still feel the urge to address the void as away of opening a space for thinking beyond fixed definitions. This can be in relation to surrounding space and architecture, the given structures of the artworld and art’s consumption in the free market economy, or in order to simply allow observers to add their own imagination to the propositions put forward by the artists themselves. If we think back to the photograph of Yves Klein frozen in space and time as he jumps off a high wall (Leap into the Void: 1960) the first image that comes to mind is of his body splattered on the pavement, but this picture is almost immediately challenged by the thought that he might be able to fly…