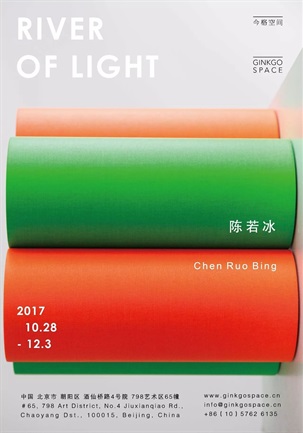 Ginkgo Space is pleased to host the exhibition Chen Ruo Bing: RIVER OF LIGHT. It is the artist's second exhibition at Ginkgo Space. The opening of the exhibitionis from 4pm  to 6 pm on the 28th of October and it will run till the 3rd December 2017.

In his solo exhibition, Chen Ruo Bing expands his work from two-dimensions, presenting a complete work in the three dimensions for the first time. The work is designed taking account of the characteristics of Ginkgo Space. Green and red painted fluorescent matt  cloth, of widths ranging from 2 cm to 30 cm, are hung somewhat randomly along the  walls of the gallery. They converge on the floor, creating moving rolls of colour. The white of the walls and gray of the floor compliment the red and green. The colours and their  energy undulate rhythmically in the gallery space, scattering and regrouping, flowing and breathing. At the same time, the long meandering path taken by the visitor through the works gives them the opportunity to walk in the “river of colors”. The space between them opens up new paths, and the visitor is compelled to look back and forwards in a  labyrinth that is without beginning or end.

The concept of this show originated a year ago in 2016 when, after his solo exhibition at the Art Museum Bochum ended, Chen began to reflect and explore new ideas. For more than 10 years, he had focused on the presentation of artistic language such as colours,  shapes, volume and space. This time, the energy that emanates from his canvas breaks out of the two-dimensional form, and permeates space. Chen Ruo Bing's work is a spiritual experience, independent of culture, society and language. He meditates on perception of color and space, probing the substance of art.