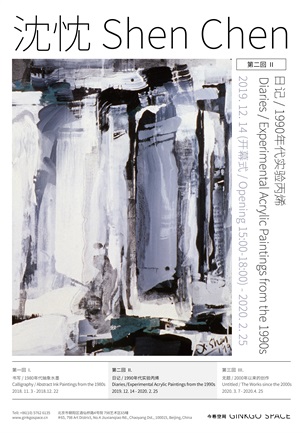 This exhibition extends from the artist's exhibition series since 2018, "Shen Chen I: Calligraphy / Abstract Ink Painting from the 1980s". At the beginning of the 1980s, Shen Chen began to explore the abstraction of ink painting, who adopted a modernist perspective for the investigation of Chinese painting aesthetics. The large area of his imagery has been left blank, leaving some horizontal, vertical or spiraling semi-circle calligraphic brushworks on canvas, with which he transformed the bland space and calligraphic features of Chinese painting towards a formalism consisted of primarily abstraction and minimalism.

In 1988, Shen Chen pursued artistic breakthroughs in the U.S. and these last three decades have left a profound impact on his artistic journey. This exhibition comprises of nearly twenty works of the "diary" series in the 1990s from the first decade since he arrived in the U.S. Taking the spirit of ink painting as his cornerstone, and the experiments on the medium as the starting point, he embarked on comprehensive practice and exploration on the notions and approaches of his practice. Shen Chen's ongoing experiments allowed him to recognize that acrylic, a water-based medium, can present the qualities and dispositions of ink painting, but also highlight the rich expression of ink painting in its infinite number of layers. Works of this period have been layered as oil paintings, and the colors are primarily based on ink, the small number of colors served as visual stimulations. On the one hand, he studied the "thickness" of the acrylic paint, at the same time, laying the ground for the "thinness" of this medium in his later Untitled series. Formally speaking, Shen Chen’s experimental ink paintings from the1980s where his vertical brushwork and lines in various combinations have become one of his most apparent visual languages. However, compared to his experimental ink painting, those works focused on the relationship between the brushwork, the psychological space of the composition and the notion

of time from the creative process. At the same time, unlike the works from his experimental period, seriality also began to appear frequently in Shen’s works, the horizontal alignments of the works and the vertical lines on canvas generate a subtle spatial relationship.

After this exhibition, Ginkgo Space will launch “Shen Chen III: Untitled / Works since 2000”. With these three solo exhibitions, the gallery attempts to broaden the perspective on looking at the artist’s journey of the 1980 s, 1990s and after 2000 through this series of comprehensive presentations.

Born in China in 1955, Shen Chen is a New York and Shanghai based artist. He began his art education in high school and continued his training at Shanghai Art College (previously known as the Shanghai “5.7” Art School). He moved to Beijing after earning his BFA from the Shanghai Theater Academy in 1982. In 1988, he went to the United States on a fellowship as artist in residence at the Skowhegan School of Painting and Sculpture. Later that year, he moved to New York upon receiving an exchange student fellowship from the Studio School of Painting and Sculpture. He continued his studies at Boston University on an MFA scholarship the following year. He has lived in New York since 1991.