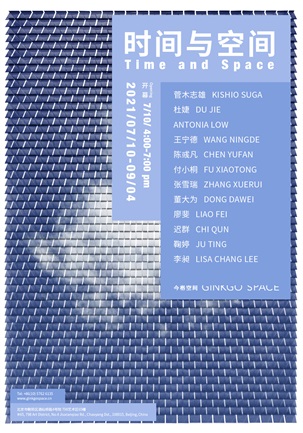 We could say, in fact, any work of art consists of certain aspect of time and space. The sense of time and space can be imbedded in the pictorial narrative of classical paintings, or it can be implied as the subject of expression or the object upon consideration, which is an approach adopted by many works after the era of modernism.

The concept of time and space is also a crucial discourse in the context of contemporary art. Underneath the temporal and special expression of the works is the artist’s perception of time and space, which not only refers the world view of an individual but also extends to a broader field of philosophy and culture. Various theories of space-time often fall into either the physical sense or the psychological sense. The former scrutinizes the relationship among the matter, the time and the space and the latter focuses on our perception of space-time through memory, experience or rational thinking, both seeping through the collective understanding of space-time in different culture.

Take the sense of time as a separate example, the Western sense of time tends to function in a one-dimensional and linear model as it centers around the idea of logos while in ancient Chinese perspective, time and space is a relational package that is multi-dimensional and circular as it is rooted in “the law of phenomenon”, upon which the idea of Taosim is added, reaching for the realization of “unity”. The different world views in Eastern and Western classical ideologies cast overarching influences on the perspectives on time and space, which are indeed distinctive in many different cultures. Yet it does not mean that these ideas stand on the absolute opposite against each other. Nor should we rashly conclude these cultural theories by defining one as the “harmony between Man and Nature” and another as the “binary system”.

Set aside the philosophical tangle, the field of time and space will be opened up by art for more fluid and freer expression. There is no need to lay down a definitive cultural identity here, the multiple possibility to look into and express the sense of time and space is itself an open table. The latest exhibition at Ginkgo Space focuses on the concept of “Time and Space”, putting forward the multiple perspectives embodied in the works of twelve artists from both China and abroad to reveal the diversity of expression about the idea of space-time in artistic practice.

The idea of time and space is realized respectively in the video works of Wang Ningde, Li Chang and Antonia Low as a reference to individual perception or a parallel universe of memory, which comes and goes in fragments, hinting at a sense of existence beyond physical forms.

While in the abstract paintings made up of continuous grid, color dots and lines by Zhang Xuerui, Dong Dawei and Du Jie respectively, the brushstrokes are led by heart, moved by successive gestures, fusing lives into the picture, conversing the less and the more and back and forth.

In Kishio Suga’s and Fu Xiaotong’s works, the presence of materiality is penetrated by an intense force, indicating the intrusion of spatial structure and the superimposition of individual intention. While the works of Ju Ting, Chi Qun, Chen Yufan and Liao Fei respectively engages strongly with materiality in order to establish the abstract field of time and space infused with their individual experience and perception.

Regardless of the narrative on the surface, these artists coming from different cultural and philosophical background, driven by different experiences each derives their own understanding and perception of time and space, combining them with abstract ideas, transforming them through effective visual forms, thus revealing the essence and the pattern within the matter.