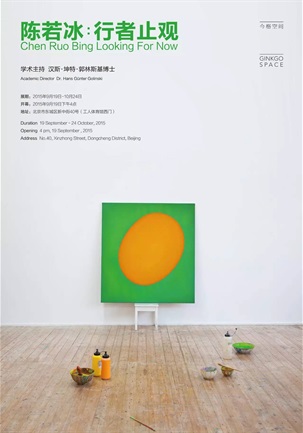 Chen Ruo Bing has selected the works for his most recent exhibition, demonstrating a remarkably thoughtful distance to his own artistic development. Both the exhibition and the accompanying catalogue demonstrate a revealing chronology of a series of experiments and a development of insights in the use of color shapes and color surfaces. The wisely chosen sequence with seemingly minimal variations gives a glimpse of the potential workings of color. The artist allows the visitor to take part in an artistic process from 2001 which continues until the present day. The pictures or series of pictures on display are acrylic paintings on canvas, and have matter-of-fact numbers as titles.

Chen Ruo Bing’s instructive presentation of color develops into a progression past individual manifestations of color, which commend one to pause in order to understand and meditate. The paintings make reference to one another so that walking through the exhibition becomes a meditative process, Kinhin (the Japanese term or Pinyin in Chinese), the Buddhist practice of conscious walking. “When a viewer faces this art, he must look long and deep, and accept the challenge to perceive with his entire being, with his senses and his soul. His challenge requires an open acceptance of primitive instincts. People must forget knowledge, synthetic and rational analysis and allow themselves to enter an intimate relationship with the canvas, forgetting all else. That way they will experience the spiritual world of the art itself and begin to know the power of visions.” Thanks to his early encouragement, his traditional schooling, his academic diligence, but also his increasing fascination for both Asian and Western art and spirituality, and lastly thanks to his artistic talent, Chen Ruo Bing has perfected his painting. With his vast knowledge of color, he precisely separates form and surface in his compositions. Nonetheless, and often only at a second glance, “splashes” are to be found in his meticulous paintings. Are these the unintentional indications of the inattention of someone who is seeking or the calculated manipulation of coincidence by a master? Whichever the case, the process of painting is rendered visible for a moment, the colors evident as raw material. The “splashes” rid the works of pathos, thus proving that spirituality can arise only from human endeavor.

Chen Ruo Bing was born in China in1970, currently lives and works in Düsseldorf. He studied in Zhejiang Academy of Art ( now the China Academy of Art) from 1988-1991. Since 1992 he studied at Kunstakademie Düsseldorf with Prof. Gotthzard Graubner and graduated in 1998. His works build up a vivid example of melting together the eastern and western philosophies with delicate and subtle formal language.

The academic director of the exhibition Dr. Hans Günter Golinski, is the director of the Kunstmuseum Bochum, Germany. He was the spokesman for the Ruhr Kunst Museen. He is focused on the developments of international contemporary art scene in the 20th and 21st century. He has curated exhibitions including “Footsteps of Buddha” (Buddhas Spur) and “ Zen and Western Art” (Zen und die westliche Kunst).