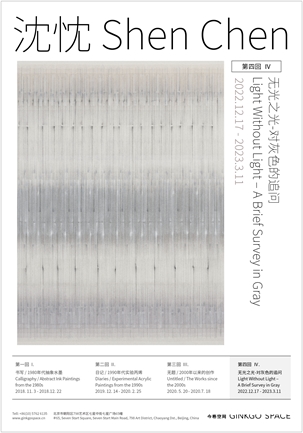 Ginkgo Space has successively launched important research exhibitions in three stages of Shen Chen's creative career since 2019, including “Calligraphy: Abstract Ink Paintings From the 1980s”, “Diary: Experimental Acrylic Paintings From the 1990s", and “Untitled: The Works Since the 2000s". This exhibition is a thematic study on the artist’s creation in the “grey period" from another perspective.The exhibition highlights 10 works from the “grey period" since 2005, focusing on his research of “grey"and his interpretations of the concept and meaning, showing another clue of Shen Chen's 40-year creation career.

From ink to acrylic, the artist always uses “grey", that is, ink gray and composite gray, as the primary color of creation. From the extension and transcendence of material ink to the exploration and practice of non-material ink, and then the paintings of perception that break away from ink but sublimate the spirit of ink, that is another key part of his artistic practice.

Art critic Zhu Qi once made an incisive analysis and discussion of the gray in Shen Chen's works in his article “Transcending the liminality of perceptual abstraction"—the previous color layers are still visible through the later layers of colors. These transparent “ink layers" not only have a Chinese-style gray tone that lies between pure white and extreme black, they also have a light tone that is different from the external light in the Western paintings. With this understanding, Shen Chen began his gray color series from 2005 to 2008. To Shen Chen, Chinese ink painting preceded modern monochrome painting. The color gradation or “the five colors of ink," and the ink color gamuts of black, white and gray of the Chinese ink painting are not “without color," they are actually "with colors," specifically “with colors" centered on gray tones.

When the exploration of modern gray tones came to this point, Shen Chen’s next step was to focus on colors. This was not a question of going beyond the concepts of Chinese and Western painting, but an expansion from the starting point of his own language. The starting point was the “composite colors" series after 2009, where the gray color turned into a composite color. The so-called “composite color" not only refers to the composite color resulting from the overlay of layers having a single color or different color(s), but also the color-tinted gray or the grayscale. This transformation was based on his experimentation of gray color, from the gray color of ink to the gray color of acrylic, then further into the composite gray color. During his experimentation of ink as a single pure gray color, based on his understanding of the color theory in Western paintings, Shen Chen found that a multi-color composite gray actually existed in the relationship of contrasting colors. Blending two or three contrasting colors in the form of thin water-based color layers according to his overlay method would produce a composite gray, or a grayscale of composite gray. Two contrasting colors, for example, red plus green, yellow plus purple, would lead to a gray color different from the pure gray of ink. If the amounts of the contrasting colors were different, a grayscale based on the color of a higher amount would appear in the color gamut. For example, if there were more red and less green, the gray color would be a reddish gray or a warm gray. Regardless of which color the gray was leaning towards, the original colors used for its production would no longer exist.

As Zhu Qi stated, Shen Chen’s acrylic gray tone abstraction, in a certain sense, is an entry point into the visual field of “micro perception," where the grayscale, the gradient of color gamut and the partition of regions are beyond the threshold readily recognized by the ordinary senses of everyday life. The recognition of the painting does not depend on a general aesthetic perception, but is the recognition after entering into the visual field of abstract micro perception. Shen Chen’s gray tones series has thus entered into the realm of what I called "perceptual abstraction."This is the only expandable area of abstraction after abstract expressionism and minimalism. The mid and late period paintings of Agnes Martin belong to this category of abstraction.

Shen Chen, born in China in 1955, is a New York based artist. He began his art education in high school and continued his training at Shanghai Art College (previously known as the Shanghai “5.7” Art School).  He moved to Beijing after earning his BFA from the Shanghai Academy of Theater in 1982. In 1988, he came to the United States on a fellowship as artist in residence at the Skowhegan School of Painting and Sculpture. Later that year, he moved to New York upon receiving an exchange student fellowship from the Studio School of Painting and Sculpture. He continued his studies at Boston University on an MFA scholarship the following year. He has lived in New York since 1991. In the 1980s, Shen Chen was one of China’s pioneers of Chinese abstract painting and experimental ink painting. He was an active member of “Art Salon” (an underground art movement). In 1978, he organized an experimental exhibition “Wild Rose” while he was still in college. Since then, he has shown his works at various art museums, including the Shanghai Art Museum and Ningbo Museum of Art. He held his first solo show in 1984 at the China Journalist Society in Beijing, collaborating with galleries in Asia, Europe and America, and has continued showing his works in China and abroad. Public collections include: the National Art Museum of China, Beijing, China; the National Art Museum of China (NAMOC)；Hexiangning Museum of Contemporary Art, China；Long Museum, China；Shanghai University, China；Today Art Museum, China ；Ningbo Museum of Art, China；San Shang Museum of Contemporary Art, China；Sagacity Art Foundation, Hong Kong；Nantong Art Museum, China；Doulun Museum of Modern Art, China；Ming Yuan Museum of Art, China；Shanghai Himalayas Museum, China；Queens Museum of Art, USA；The Museum of Chinese in America, USA；Kunsthalle Recklinghausen, Germany；Bochum Museum, Germany；Museum Hurrle Durbach, Germany；ME collection, Germany；White Rabbit Collection, Australia；Collection of Reydan Weiss, Germany；Akzo Nobel Art Foundation, the Netherlands；Duke Energy Corporation, USACollection of Fu Ruide, the Netherlands；Stibbe Collection, the Netherlands；Johnson and Johnson Foundation, USA；J&J Art Foundation, USA；Roma Academy of Fine Arts, Italy.